How To Experience Mt. Pulag | Not Your Typical Hiking Guide

The Highest Peak in Luzon, The Hike Was Just A Bonus

It was around 10PM and we were all eager to climb and witness the majestic mountains of Mt. Pulag in Bokod, Benguet. I had brought a few friends along: a colleague from my office, a friend I had met on my trip to Kalinga, and my cousin who just recently arrived from Dubai. Three strangers with one connection : me.

We had joined a group of 12 (including us) that was being handled by our previous guide, Abby, who had been excellent company when we hiked Mt. Ulap (in Benguet as well).

The natives call Mt. Pulag ‘The Playground of the Gods.’ The summit elevation being 2926 MASL (meters above sea level). It is considered the highest peak in Luzon and the third highest mountain in the Philippines.

They say that Mt. Pulag can be quite a challenging climb due to the extremely cold weather conditions, but we were all too excited to think about that.

As we left Manila, we didn’t expect our trip to be most memorable, evening coining the group name “Team Jopay” — we had a portable karaoke system inside our van and one guy would often sing the filipino song ‘Jopay’ by Mayonnaise.

We had arrived in Benguet around 6:30 AM and stopped by a quiet little place where we had breakfast on a balcony overlooking the mountains. 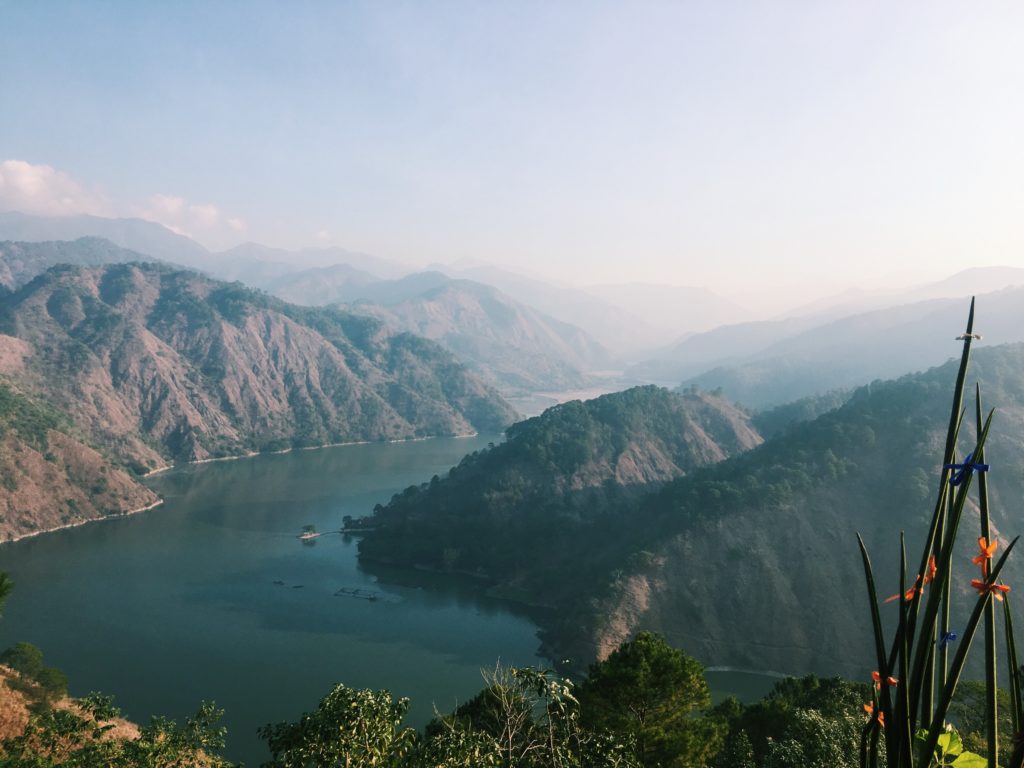 DENR (The Department of Environment and Natural Resources)

We arrived at the visitors’ center and waited our turn to be registered in the DENR office as there will be an orientation before we can go to the actual grounds.

At the DENR Station, there are places where you can purchase pre-owned items like jackets just in case you were not prepared prior to the trip. They also sold new items like bonnets and gloves as well as the typical souvenir items that you would find. They also had convenient stores (sari-sari stores) where you can buy food among other things.

Usually, they no longer allow DIYs (do it yourself) going to Mt. Pulag for safety and traffic control reasons.

After a video was shown, we were briefed by Ms. Albas, the Protected Area Superintendent, who reminded us of the rules and regulations of the park.

Rules such as :
– Stay quiet as these are sacred grounds. She even made jokes about someone who proposed on top of the mountain and people even cheered; then all of a sudden it started to rain.
– Carry your own trash and no littering in the park
– You must stay hydrated and have food with you for energy (a medical certificate is needed to prove that you are physically fit to climb by the way)
– You must put on comfy shoes and warms clothes (thats a given lol)

She explained due to the foot traffic, the groups on the designated hikes on the Ambangeg Trail would be divided in two sites. These were for the viewing of sunrise on Mt. Pulag – the most awaited moment on the hike.

We were assigned to tower station and from what we gathered, Tower Station has a much better view point during sunrise and higher chances of witnessing the incredible sea of clouds.

Going up to Ranger Station was like a little adventure in itself. Our group topped-loaded on the jeepney that led us to our jump-off point.

Like most rides going up a mountain, it was a bumpy ride with ups and downs;twists and turns. It almost felt like a roller coaster.

Everyone in the group opted for homestay because it was the most comfortable choice.
The village was a bit underdeveloped as you would expect, but we made due with what we had. It wasn’t that bad, but if you’re from the city, it might come as a little shock (especially the toilet situation).

You won’t find actual restaurant establishments here, but you can find places where they have homemade food and it is always served with red rice.

Everything actually taste fresh, especially the vegetables that they grow and harvest in the area.

If you’re up for the challenge in really cold weather, there is a place there that sells you a peculiar halo-halo (mixed shaved ice dessert). We definitely tried some. It will give you chills though lol. 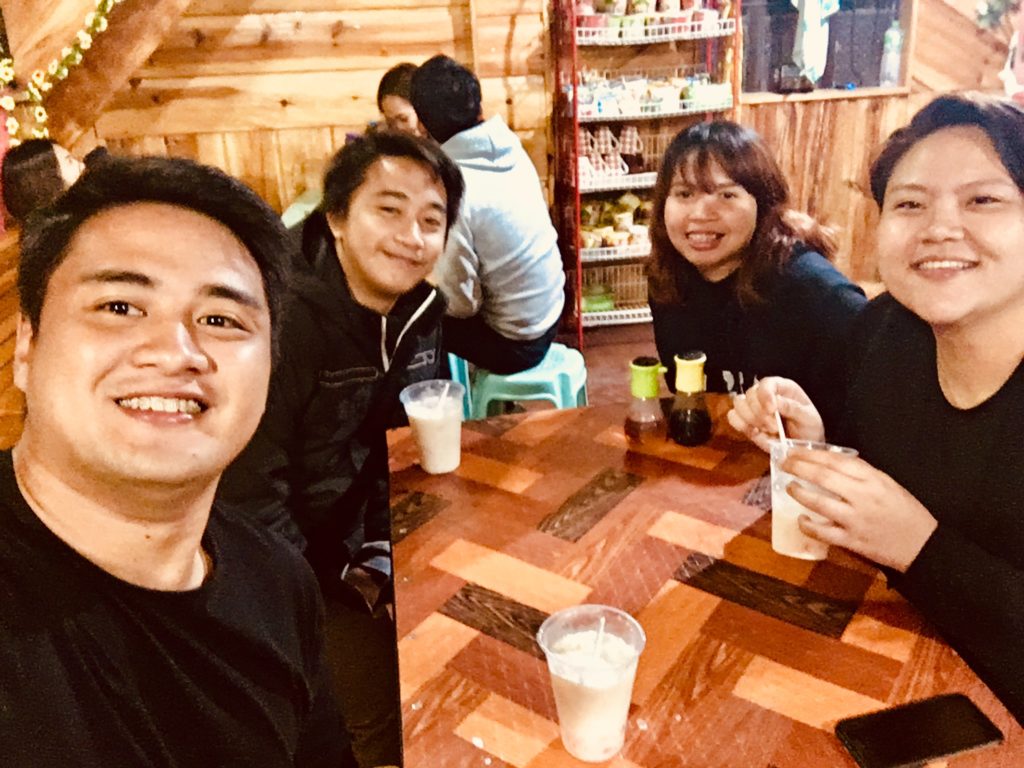 Around 8pm (after dinner), our group had decided to get our bodies warmed up with a few drinks, not to mention a pre-birthday celebration of one of the hikers in the group. Emperador Rum was one of the few alcoholic beverages available in the sari-sari stores (with coke or water as a chaser).

We were crammed up in a space smaller than you can imagine, but the 2 double decks were able to fit us all.

As we passed around the shot, we witnessed some magic. We felt as if we’ve been friends for a very long time, even though some of us just met.

We shared personal stories of the past and the present, and how we came about the journey of hiking the highest peak in Luzon. We talked about who our ‘Mother Mountain’ was or what was considered our very first hiking experience. For some it wasn’t their first hike in Pulag. Something always brings them back because every hike gives them a different experience.

We laughed, some almost cried, some were just quiet, but everyone had a good time.

We packed-up around 11pm, just a few hours of sleep before the start of the Trek. 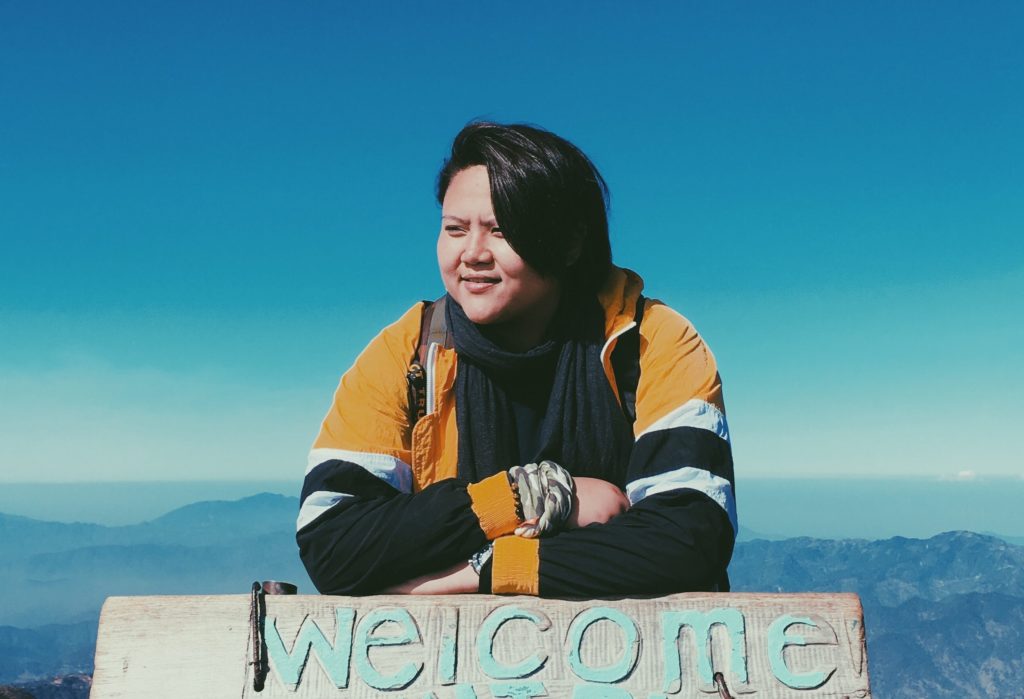 It was cold and dark. The first few steps, I thought I wasn’t gonna make it. Breathing alone seemed difficult enough.

We were briefly oriented by the local guide and we started our trek.

I had three layers of clothing on, gloves, and a small head light to guide the way. You couldn’t appreciate the beauty of Pulag yet because you were covered in total darkness.

It was like entering an enchanted forest. There were a lot of assaults (or up hill climbs). You had to be very careful every step of the way.

I had removed some layers of clothing from time to time and eventually put them back on due the cold piercing my skin.

We made it to the tower station in around 2-3 hours, just in time to experience the sunrise ——— and it was definitely a sight to see. The colors of the mountains, the clouds rolling in, the sun rising. It was Mt. Pulag. While you see the sun rising, you’ll still be able to catch a glimpse of the moon on the other side.

We sat down, took some photo opportunities and enjoyed the moment. 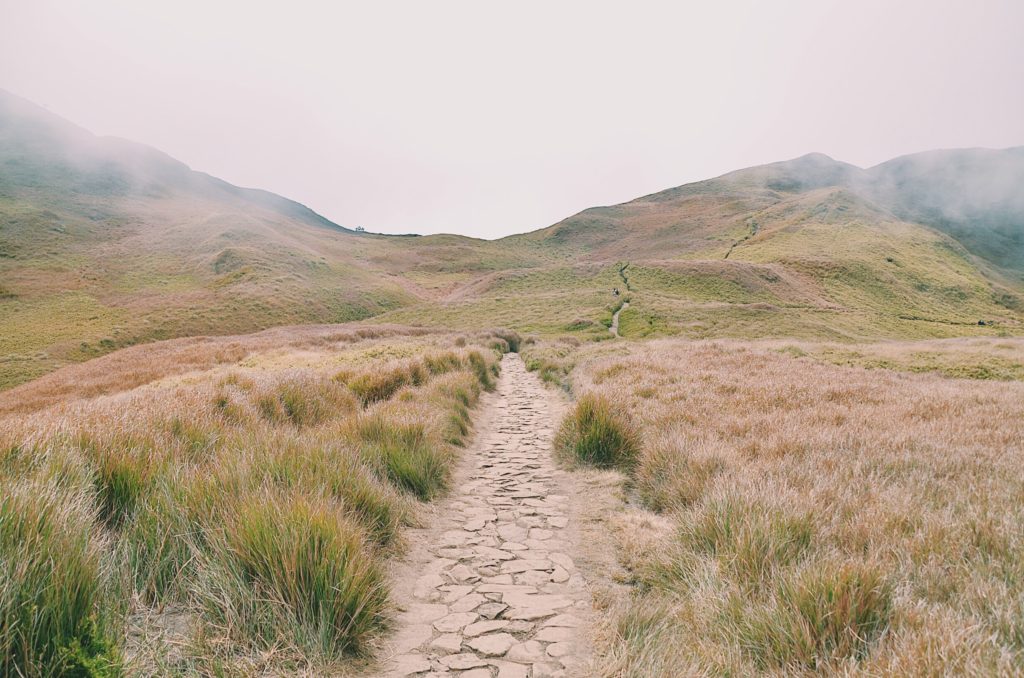 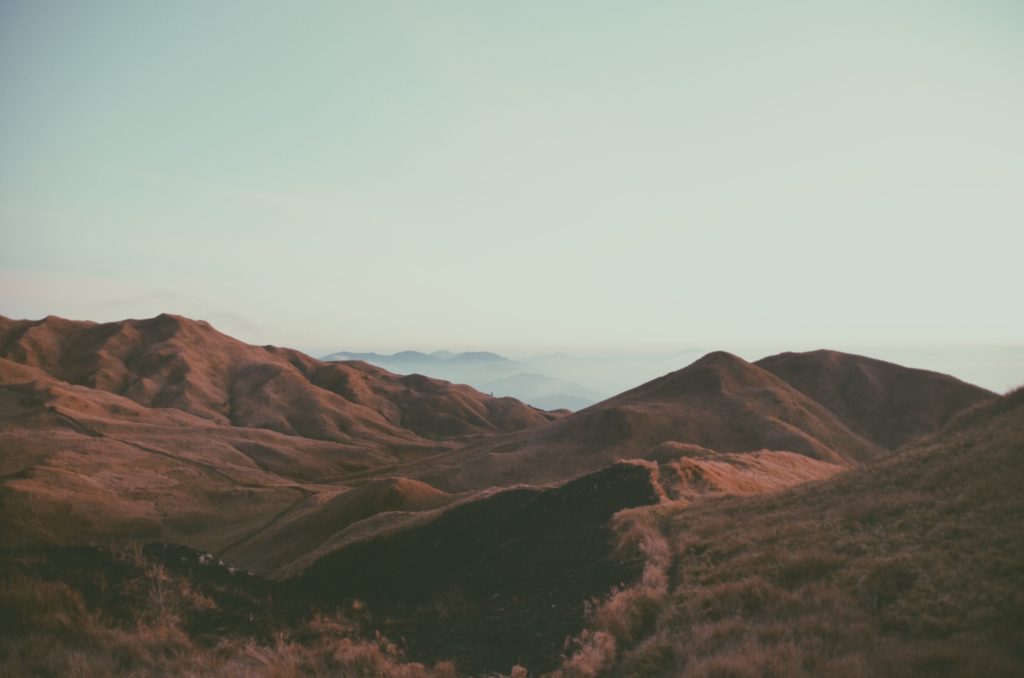 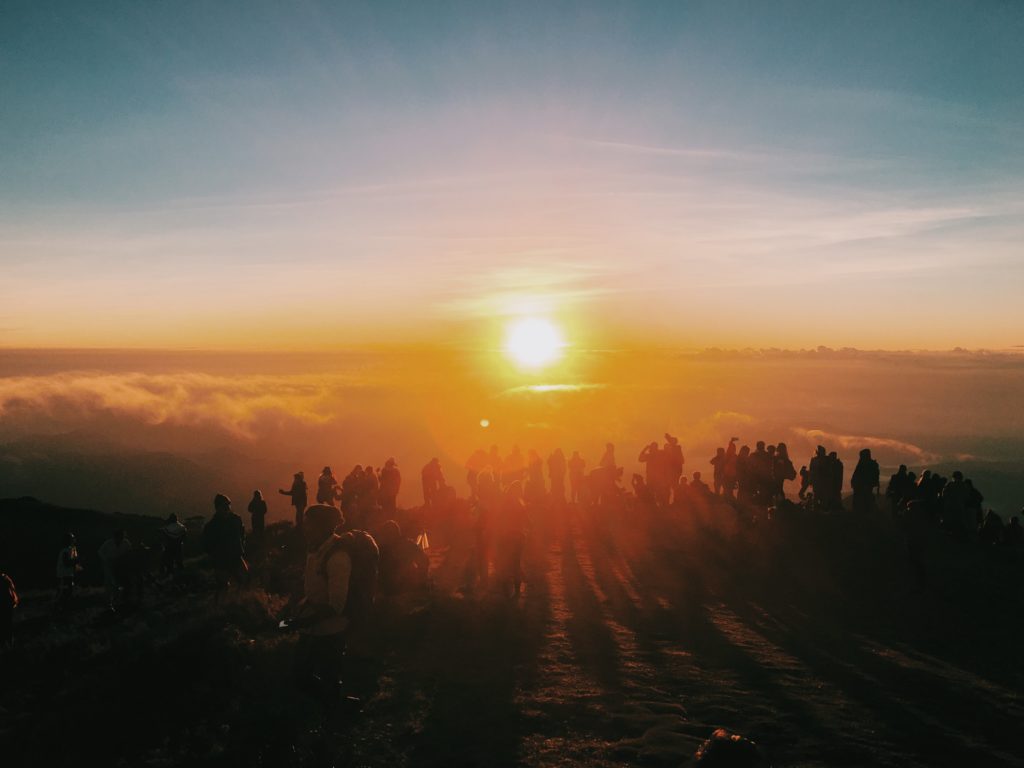 After sunrise, we continued our trek to the Mt. Pulag Summit (the highest point that you can reach). Going there takes about 4-5 hours from your jump-off point, so we had another 2-3 hours from Tower Station.

The place was full of biodiversity : different textures of plants,grass,moss and trees.

Each place that we had passed had its own personality.

When we made it to the Summit, we joined one of our group mates for a victory dance. Literally (watch the video here)!

After taking in the majestic view, we made our way back down. On the Ambangeg Trail, you have to go out the way you entered. It was another 4-5 hours before we reached Ranger Station, but everyone made it back eventually.

It was wasn’t a race back, but a slow and steady walk to enjoy the view for the last time.

We documented our conquest by having certificates printed in memory of the incredible journey that we had.

We went to back to Manila and our group parted ways.

We went about singing that song ‘Jopay’ during the car ride home. There’s a lyric in the song that states ‘Aalis tayo sa tunay na mundo.’

In English, ‘We’re leaving the real world.’ And in those moments on Mt. Pulag, we did. 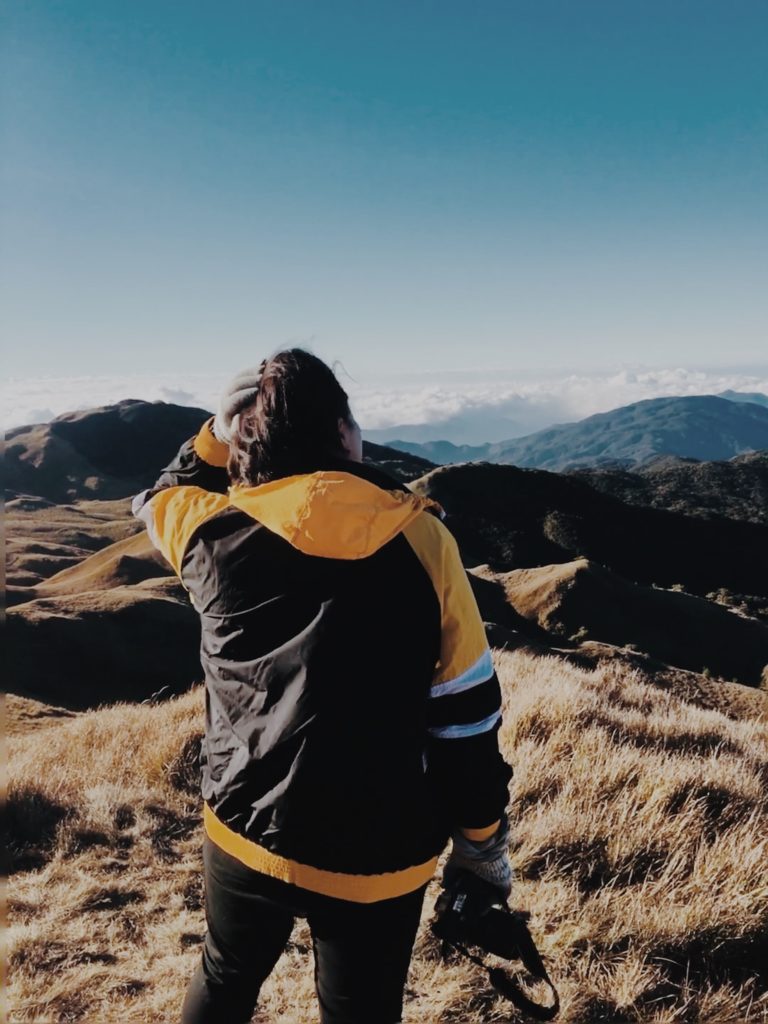 Happy Travels from The Clever Trekker.